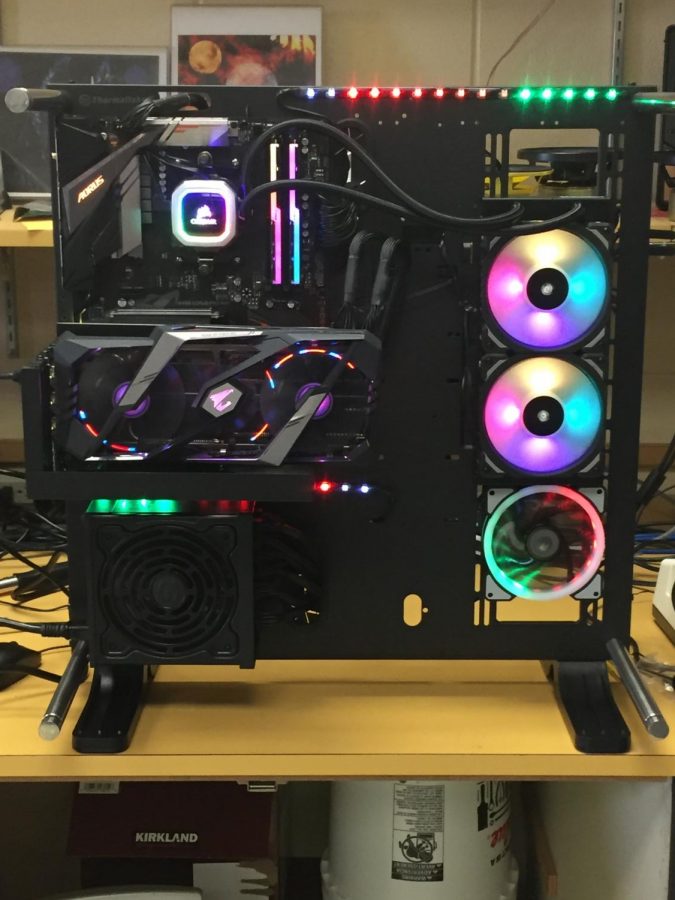 Dylan Martin designed a complete computer in a new program for the CTE Department.

During the month of March, the Sedro-Woolley High School CTE department allowed and funded a student to custom make and design a computer. The project’s goal was to further the experience and understanding of computers.
This student, was me, Dylan Martin a SWHS senior. I was the first student to take part in this program, so basically I was the test subject to see if this program would play out and if this program would be worth supporting. Before I tell you everything, there is key vocabulary that you need to know throughout the process which include: Power Supply Unit or PSU, Central Processing Unit CPU, and Graphics Processing Unit GPU.
I was in charge of getting a parts list, except the CPU which was decided by Curtis Ypma, a CTE computer science teacher at SWHS. This list consisted of “EVGA SuperNova PSU 850watt, A 1TB m.2 and 500GB m.2, Corsair H100i RGB Platinum-a radiator for the CPU, Gigabyte B450 Aorus Motherboard, Aorus 2070 OC GPU, Trident Z RGB 3200mhz 32GB Ryzen 7 2700x CPU, Thermaltake’s P5 case and some accessories.”
Now before I go on to tell you how I built this computer, I want to reflect and tell you how I got here, how the CTE department turned my future around and how the care of a few people can change someone.
At the beginning, as a freshman, I was a very bad person. I hated teachers, school, and life itself, but then I found something that changed that. After seeing this, I started to change, which led me to the CTE department programs: woodshop, computer science, digital design, and much more. The first program I took were computer science and design.
After taking those classes, I realised how much I loved technology. I slowly got my act together, bringing my grades from F’s to C’s and from C’s I took it to B’s.
I tried to put more and more technology classes into my schedule, leading me to my favorite class I’ve ever taken, which would be computer technology intern for Debbie Wilson.
This class made me smile, gave me a sense of peace when I worked on computer hardware and software, but not only computer also projectors, printers and chromebooks.
Now onto the main topic, I started with the help from Isaac Sanders, a student from Sedro-Woolley High School, to build the case, then from there I, alone, built the rest of the computer. Starting with mounting the Aorus motherboard, Supernova PSU, H100i radiator, M.2s, Trident Z RGB, LED fan and strips, Aorus 2070, and mounting the Acrylic.
I started this build on March 21, and by the end of the process, the only part that I regret on this build is not getting a better smaller case, a bigger radiator, and just all around a more compact build.
The CTE department is also looking at taking this project and making it a program for those with a high interest in computer software and hardware. Future students with high interests will be chosen, if there are multiple students then one will be chosen randomly, to create a custom computer of their own for the department. Each build will have about the same price range as the Aorus.